How Social Media Helped people after terrorist attack like Brussels.

The bombing, which took more than 30 lives, threw the city into chaos. But in one bright spot, the positive impact social media during a disaster crystalized.

As emergency hotlines and wi-fi networks became overwhelmed. The crisis center for Belgium tweeted in French and English:

Don’t call. Use texting or social media. Network is getting saturated #Brussels

If you’re looking to contact friends/family in #Brussels info is here in this r/Belgium thread: https://www.reddit.com/r/belgium/comments/4bgfr3/ontploffingen_in_vertrekhal_luchthaven_van/ …

Which quickly turned into a “MegaThread” with important information.

It included a link to the Red Cross’s “Safe & Well” program which allows people to list someone they are looking for or mark themselves “safe.”

Facebook joined in too, turning on their safety check feature, which not only marks locals as safe but alerts you to which friends in the area have yet to check in.

In addition to providing a means of communication, social media has been dominated by outpourings of sadness, love and solidarity for those affected by the bombings.

The role of social media during a crisis has been seen before.

In fact, the #JeSuis hashtag pays homage to the #JeSuisCharlie mantra after the attacks on the headquarters of French satrial magazine Charlie Hebdo

Then the hashtag showed up again in the aftermath of the attacks on Paris, France and has been since associated with terrorism:

But Twitter didn’t just use hashtags to react to the attacks, the platform quickly made more useful hashtags that worked as message boards and information sources.

For French citizen unable to fly back home through Paris, Americans began offering their homes    with #StrandedInTheUs:

If you are a french or lebanese national #strandedintheus in los angeles, I have an empty room for you. Please…

In Paris, #PourteOuvert or “open port” signified a safe location for people, and gained more      than a million tweets in 10 hours: 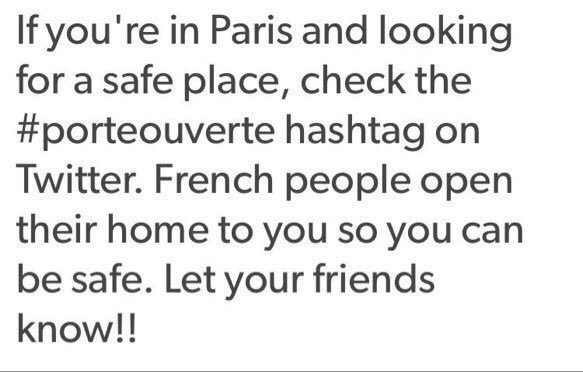 But perhaps one of the most impactful was #RechercheParis, a tag with lists of missing people and armies of twitter users looking for them:

Patricia Dabel and Jerry Jean Elien have been found and they are ok. Thank you for all your help. #rechercheParis

Finally, people used Twitter and Facebook to offer hope and solidarity where they could, giving a voice to millions.

One hashtag, #UneBougiePourParis (“a candle for Paris”), summed up the hearts of so many. Whether together, separately, in Paris or across the ocean, people lit a candle for those lost and share it online:

Similar hashtags, databases and online projects are already popping up in response to Brussel’s tragedy, showing once again how social media can elevate voices across the world in a unified moment.

Read the original article on http://ijr.com by clicking here