SAN DIEGO (CBSLA.com/AP) — As authorities investigate attacks on two women wearing hijab at California universities in the days following Donald Trump’s election to the presidency, there are more reports of racially-tinged attacks emerging via social media.

San Diego State University’s police department said two suspects who assaulted the student on campus Wednesday had targeted her because of her faith and made comments about Donald Trump’s election.

The woman was not hurt. Authorities said the assault occurred in a parking complex while the woman was wearing a hijab. The suspects stole her car keys, and the vehicle was later reported missing, authorities said.

To all the people that say Trumps rhetoric does not affect people, a Muslim girl got attacked and mugged today at SDSU. Please stay safe. pic.twitter.com/b9YXu0ccc5

“We condemn this hateful act and urge all members of our community to join us in condemning such hateful acts,” SDSU President Elliot Hirshman said in a statement.

A similar report came from Northern California, where a woman said she was walking in a parking garage at San Jose State University when a fair-skinned man in a hooded sweatshirt came up behind her and pulled at her head scarf, the university said in a statement.

The victim was briefly choked and lost her balance before the suspect ran away, the statement said. 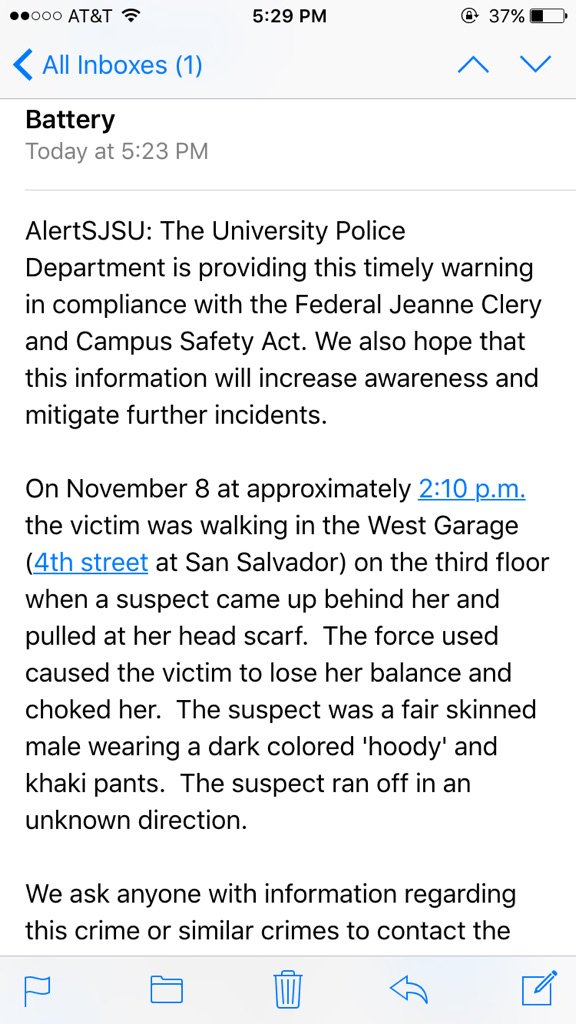 A lengthy post on Facebook by a woman said three white men and a white woman called her an “illegal bitch” and asked her “Are you ready to go back to where you came from?” as she went to get something to eat at The Shoppes in Chino Hills. The post said that when she tried to walk away, but that the four followed her, pushed her toward a wall and the woman pulled her hair as they asked her, “Can you even speak speak English?” and “Nobody cares for your kind, you’re hardly human just an animal.”

The woman, who identified herself only as Kat Padlan, said two older white men ran to her rescue, which prompted her attackers to say, “You can’t even tell what it is, is it Asian, Mexican, it needs to get out of here” and “Why would you betray us?”

San Bernardino County sheriff’s spokeswoman Deputy Olivia Bozek said the department was aware of the post and is currently conducting an investigation.

Another Facebook post by a user named Chris Yun described being called a chink at a Simi Valley 7-Eleven store, and being told to get out of the country because a more “pure America is finally going to come back.” When the clerk asked the men to leave, they called him Bin-Laden and said they would come back to burn him on a cross.

Tani Ikeda, the director of talent management company Whitesmith Entertainment, said she was walking in her Venice Beach neighborhood when she and another pedestrian were sprayed with a hose until they retreated to the other side of the street.Simi Valley police Commander Stephanie Shannon said no reports had been filed under Yun’s name, and that she was unaware of any reports of this nature being made.

Burbank police said that officers were sent out to Joe’s Bar, 4311 W. Magnolia Blvd., on the report of a man with a gun after 4 p.m. Thursday. Witnesses at the scene said a man brandished a gun after an argument over the presidential election and illegal immigration. One of the men, 41-year-old Martin Pena of Van Nuys, was arrested on suspicion of being a felon in possession of a firearm and brandishing a gun, while a second man, 47-year-old Mark Van Dergeugten of Granada Hills, was booked on suspicion of DUI.California Attorney General Kamala Harris on Thursday issued an information bulletin to law enforcement agencies, outlining laws that prohibit hate crimes.

Social media reports are also highlighting some of the encouraging signs in the wake of the historic presidential campaign.

Read the original article on http://losangeles.cbslocal.com by clicking here